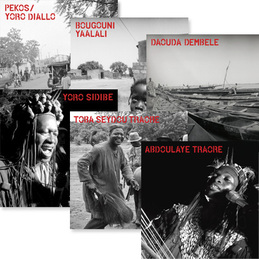 All proceeds will benefit the artists in Mali

Reports from YYR's friends in Mali are not good. Earlier this year, fundamentalist Islamic group Ansar Dine, an Al Qaeda offshoot, began to take over numerous villages in the north of Mali and establishing Shariah law. While Mali is a Muslim country, the form of Islam practiced varies greatly across Mali, and more often than not is interwoven with local religious beliefs, creating a very moderate and tolerant form of Islam. The fundamentalists are knocking down Sufi shrines and emptying ancient libraries in Timbuktu. Reports of deaths by stoning of women who do not wear veils, men who listen to music, smoke and drink beer, are starting to surface.

Hundreds of thousands of refugees from the north are streaming into Bamako and other southern towns to escape the invaders. Coupled with a severe year-long drought across Mali, times are tough.

As always, just about every penny you spend on these releases will be sent to the artists in Mali.