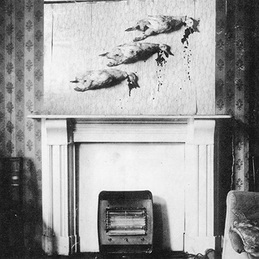 How a man can get in a glass booth on a game show and frantically grab at blowing cash is beyond me. Various artists have rarely been so varied, so artistic.

"Remember when Drag City was like REALLY cool? Remember when all their bands sounded like they were recorded in your friend's shitty basement (P.S. "grunge" and "lo-fi" are still really cool), and Will had a bro, Bill was drunk at your wedding, Neil was taping up his arms, and best of all DC released actual compilations featuring actual New Zealand loners and Strangulated Beat-offs' side projects? After one digested the scuzz of Making Losers Happy pretty darn fully, awaiting was the almighty 2LP fucking Hipgnosis-covered monolith Hey Drag City. I will never know who "Desert Storm" or "Burnout" were/are/could have been (generally a good thing), but all you lil indie completists will surely covet the fiendishly rare-ish tracks by Pavement, Palace (yes that's as in OLDHAM), Smog, and Silver Jews (back when he recorded with a string and 2 cans). BUT the real "Cool's Gold" is in yes, The Beatoffs' psych-jammer project Fruitcake, who contribute the gorgeously lengthy, lilting, and oddly-probably-not-about-masturbation bit of reverbed bliss known as "Ike", which made it on a few mind excursions with this cosmonaut as a young whippersnapper. When will the unreleased LP come out? Oh, that's right, NEVER. My NZ homeboy Alastair Galbraith delivers one of his best incantations, that will simply have you chanting "Yuhahi" through a blown-out amp til the heavens open. Of course the Trux deliver a gloriously rambling rawk ramble (with tasty sax, kids! that's cool too) that is as unpronouncable as Prince's dog's new name. Vocokesh (c'mon remember that cool etched Lp?) will make the prog (stoner) dad in you happy, and the "art-funky" of King Kong and Red Krayola will make your cool uncle stroke his chin while he does the forbidden dance....so yes, you're in for a real journey here, and there are still LP copies for sale? Pinch me, Mantis! (oh yeah, Drag City used to like "hardcore" too that's coolest)"