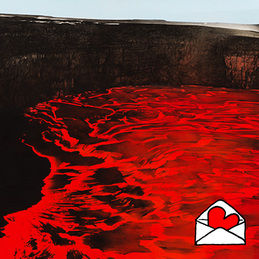 "Blackness of the Night (feat. AZITA)"

Determined to make a new friend out of an old favorite, Bonnie ‘Prince’ Billy and Bill Callahan dropped a tape letter through AZITA’s mail slot, asking only for one in return. The contents they sent: one of Cat Stevens’ earliest protest songs. What they got back: a version of the song to sing together! Though unfamiliar with the tune, AZITA arranged and played it entirely, attaining celestial translucence by downshifting into a slower tempo. The harmonies of Bonnie and Bill step into the spiritual spotlight, as fresh dollops of synth and other keys bloom in the darkness. Cat’s version pays a debt to the churchy sound of Procol Harum; AZITA spends the sum in other ways, transposing the instrumental break into a heavenly guitar break before giving way to the two Bills, who take it out with a last pass of harmonized hope against hopelessness.

Cover artwork by Becca Mann, shown at Soccer Club Club as a part of Pacific, April 2018.