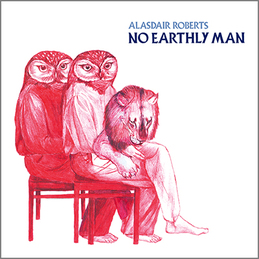 A new, fresh take on the traditional song of the British Isles. Death Balladry from your favorite Scotsman.

"There's no year on the CD artwork for this record; as a kid, I found it interesting and helpful when LPs would have the year of issue incorporated somewhere. As an adult, this information is even more valuable... and it is irksomely absent. So, in the year ? (2004! geez... -ed.), I was asked to go to Scotland to work on an Alasdair Roberts recording session. My luggage was in limbo for a few days, and I was forced to buy the red-white-and-blue candy-striped pajamas that I still wear today, when I wear pajamas. I remember the session as having a homey, Waltons-esque environment. It was whatever time of year it is when you have fires outdoors, because we had fires outdoors. There was nothing within walking distance except a whisky distillery. People arrived to play or sing their parts, and then they left, although most of us seemed to be there for the duration. The Drummer and the Cellist slept across the hall from the Nominal Producer and made giggles and other noises throughout the night; noises running the gamut from endearing to unappetizing. We had news that the Fiddler was a hotshot player who sported a Mohawk hair-do... my memory says he arrived without anything fancy growing out of his head and memory also says he played very well. There are some records that are so full of life when you are there among the making, and this is one. Everyone sat together in the room for the -Lyke Wake Dirge' and arguments were made with Roberts about which take to choose. It was hard to be objective with so much energy in the rooms. I met my friend and colleague Alex Neilson there (as I wrote this sentence, Neilson has written me that Captain Beefheart is dead); Isobel Campbell turned me on to Stenbock's Studies of Death, which in turn began a communication for me and others with David Tibet and then Baby Dee; I was able, with authority, to witness the reconstruction of songs that come from a tradition that holds strong significance for me (Bonnie Prince Billy & Harem Scarem took our version of "Molly Bawn" from Roberts' a couple of years later); and, most of all, I was able to discuss, advise, and witness Alasdair Roberts (a musician I had observed and participated with for years, but always at a distance) at work in person. Roberts' playing and singing is wonderful to behold, as any who have seen him will attest."