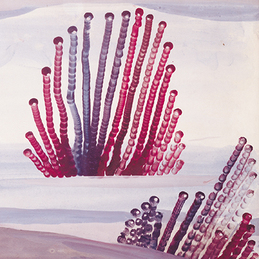 The Night Is Advancing

3rd full-length release, produced by Rian Murphy & Sean O'Hagan. Fragile and haunting. Buy it for yourself, and a few loved ones...

The Night Is Advancing is a transformational album for Alasdair Roberts; it sees him on the move, leaving behind the loose collective old world, modern world sound of Daylight Saving which I'll always associate with the Glasgow-Bristol soft axis of Appendix Out, Movietone, International Airport and Crescent. I'm not sure if he arrives at a new place (maybe that happens on Farewell Sorrow ) but he definitely travels a spiky, weird journey, as captured by the well-chosen cover painting by Eugene Gabritschevsky. The music is open-ended, unresolved, mysterious; recently Alasdair mentioned that he'd been listening to Tony Conrad and other drone based musics and tried to incorporate some of those ideas; at the same time his interest in traditional Scottish and British Isles folk songs was growing.

Coming back to this record now, I realise I felt strangely unfamiliar with it. Tom Crossley, who has played on most of Alasdair's records says he has almost no memories of recording it; it seems to hold its secrets well. Yet, in the end all is there; Sean O'Hagan and Rian Murphy's production has a really nice understated feel with lots of good detail, and "Organise A March," one of Alastair's straightest and best songs, closes the record out gracefully and magically. I'm not sure why Appendix Out became Alasdair Roberts soon after; I was thinking of St Paul's words on becoming an adult and needing to put childish things aside, but this odd, great record is completely connected to, and in places the equal of later, more renowned works. I've really enjoyed spending a lot of time with it these past couple of weeks and would recommend the discerning Drag City listener do likewise.