Bill Callahan will be galloping all over Europe for the next couple weeks. In other exciting Callahan news, I'm sure all of you know by now that Gil Scott-Heron has a new record (first in 16 years) and the title track is a Smog cover! That's right, "I'm New Here" can be found on 2005's A River Ain't Too Much To Love. I'd say home is where the love is! 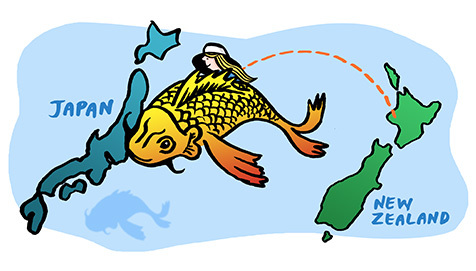 Harp on a Carp!

In a vale of tears, Joanna Newsom leaves one set of Pacific Islands for another! After a very pleasant affair in Australia and New Zealand, she is now starting over in Japan - a mini-tour for an ultra-country. Ohayo, Nippon!

Galactic Zoo Dossier drifted innocuously but seductively into the world in 1995 - and nothing ever looked the same again! After four underground issues, distributed when and where those who would appreciate it congregate, word on the street was, this is the coolest hand-written-and-drawn psychedelic fanzine around! No offense to Ptolemaic Terrascope...they had their day.

It was the momentous year of 2001 that Drag City decided to take the "GZD" under its large feathery wing of production and distribution. And since then, nothing's ever looked... END_OF_DOCUMENT_TOKEN_TO_BE_REPLACED